16 JanTimeline: The evolution of One River, Many Stories 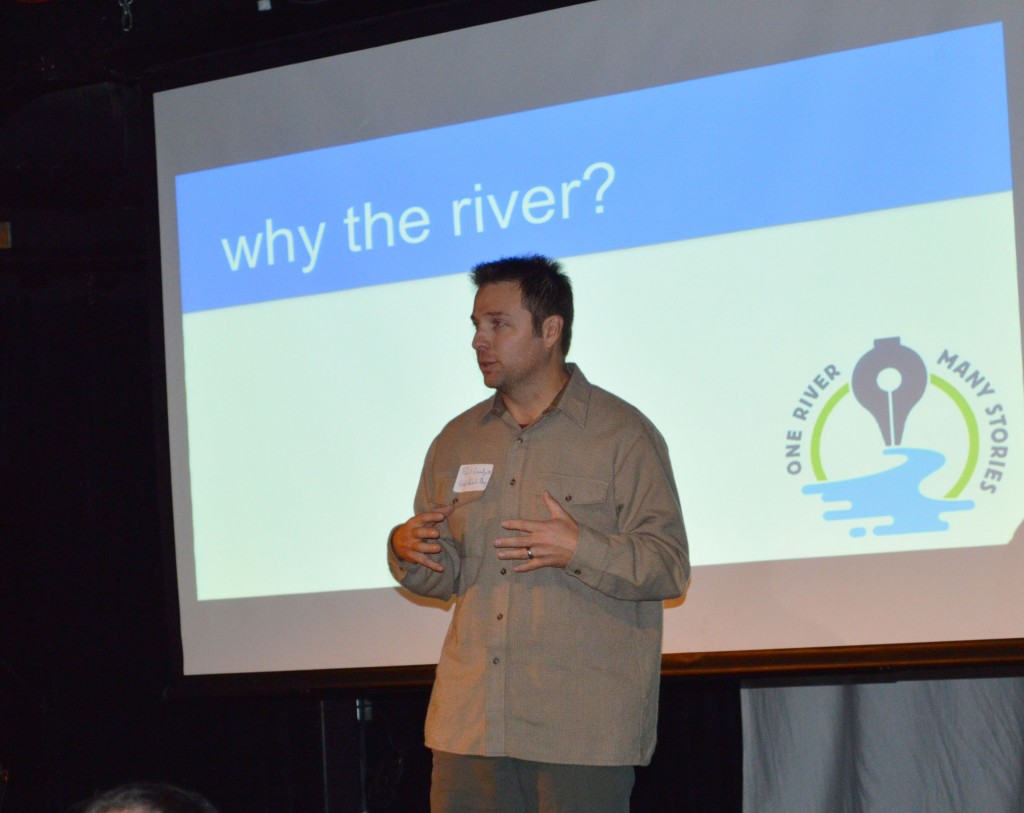 Perfect Duluth Day president Paul Lundgren speaks to journalists at the Duluth Media Summit in October, 2015. Lundgren was inspired by his mentor, the late Mike Simonson of the University of Wisconsin-Superior to propose a project focusing on the St. Louis River. (Photo by Mark Nicklawske)

I’m fond of saying that this whole idea is Paul Lundgren’s fault. On my busiest days, I’m cursing him when I say it. On most days, though, I’m praising Lundgren, the president of the citizen journalism website Perfect Duluth Day, for pushing us all to move forward with this media collaboration experiment.

One River, Many Stories: Quick background

First, some background about what we are trying to do.

In April, we are asking all journalists, storytellers, citizens — you, if you are interested — to tell one story about the St. Louis River, its communities, its history, its people.

When you publish that story, share it with the world on social media using one of our hashtags: #OneRiverMN, #ChiGamiiziibi (the Ojibwe name for the St. Louis River).

Once you do that, your story will join the aggregated collection of content produced by others in the region. We hope One River, Many Stories will be a powerful demonstration of what happens when all the region’s storytellers focus their attention on one topic.

That work, in fact, has already begun. You can see the growing collection here.  (You can even host this same collection on your own site if you want to. Contact me and I’ll show you how to use the aggregation tool, RebelMouse.)

But why are we doing this?

Paul Lundgren has written a heartfelt account of the inspiration for choosing the St. Louis River that you can read on the PDD website. What I thought I’d try to do here is recount how we got to this place. 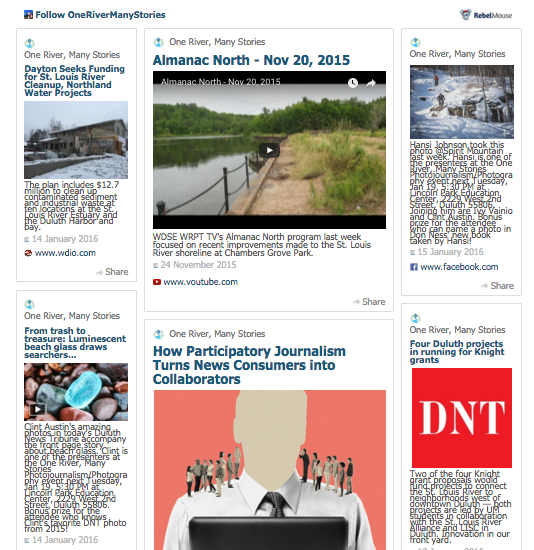 Using the content aggregation program Rebel Mouse, the One River, Many Stories project will provide a way to link audiences to all the stories told about the St. Louis River in the upcoming year. This program allows others to host this same content on their websites as well.

It began with one cup of coffee. Paul tells me that first cup of coffee was in Fall 2014. The first meeting as I recall it, was between Lundgren and me. As one of the journalism faculty at UMD, I’d developed a pretty good relationship with Paul. We’d often get together to chat about potential interns and the evolution of his website.

So we had some coffee and I said, as people do, we should get together again sometime.

OK, Paul said, breaking out his calendar. When?

And so we met again. A month later, I got an email from Paul reminding me that we agreed we’d do this. And somewhere along the way (Paul says March 2014), we decided to invite a few others to join us: Chris Julin, a UMD journalism instructor and audio journalism guru, became part of the crew. Then came Emily Haavik, a graduate of UMD’s Writing Studies program who had worked as an intern for Paul at one point, and is now working as an intern for American Radio Works and a researcher for American Public Media.

Of course, any group needs a name. Paul jokingly suggested Javalism; he assured us we would come up with a better one.

Javalism was fun. It was a chance to hang out for an hour or so, talk about journalism and laugh. Each month we’d pick a new coffee shop in some new area of town and show up. Paul made sure we never missed a month. (As I said, it’s all Paul Lundgren’s fault.)

In late 2013, I received a grant from the University of Minnesota to explore how our Journalism program could connect more with the local journalism community. This would be good for me as a professor, and it would be great for our students.

So, I suggested to the Javalism gang, what if we hosted some kind of media event? We could just get local journalists together — if they wanted to get together — invite in some guest speakers with cool ideas and just see what happened.

Working with then-UMD graduate student Dana Thayer, we planned an event called the Duluth Media Meet and Greet, which fell, eerily, on Halloween of 2014. We jokingly said we thought this event had the potential to be scary. Since the venue, Teatro Zuccone, was decorated in Halloween for a show that evening, it added to the ambiance.

Our presenters were two people who had inspired my own ideas about the future of journalism over the years.

Jan Schaffer, executive director a project called J-Lab joined us via Skype from Washington, D.C. I had attended a number of sessions hosted by Schaffer where she brought in journalists that were experimenting with community-level collaboration among news organizations.

The presenters were great; the audience was even better.

Journalists of all sorts from most of the region’s news organizations participated. They asked great questions. What’s more, they seemed to be saying, good. We’re on board.

We left that event with a strong encouragement from the audience: Let’s find some ways to play together.

Now there was no turning back. The meeting had been a test to see if local journalists wanted to build stronger connections. They did.

And, I don’t remember when it happened, but at a Javalism meeting soon after, Paul came to see us with an idea. Let’s write about the St. Louis River.

For so many reasons, the river was the perfect choice. The river was getting a lot of attention. Government and grassroots organizations were already hard at work on efforts to revitalize the river and the communities along it. Our project could help draw more community energy to that work.

And, we learned, we also had a great opportunity.

At the media Meet and Greet, Iggers had mentioned to me that he was envious of us having the chance to apply for one of the Knight Foundation Cities Challenge. What’s that, I asked. He told me.

I read through the application and found it was easy enough to submit one.

So we did. We pressed submit and assumed we’d get back to our monthly coffee meetups.

Spring, 2015: Congratulations! Now get to work

Almost a year ago to the day we got the news that our project was among the 126 finalists for the Knight Cities Challenge. We were excited. We were nervous.

The next step was a doozy. Now, we had to take this cute little idea that we’d tossed out on a whim and put some substance behind it. It was time to get to work.

Fortunately, it was about this time that Jennifer Moore joined the team. Moore, then a professor at the University of Maine, would be joining us at UMD that fall to head up our multimedia offerings. She quickly got excited about the project. With her background in online startups and experience in other media collaboration efforts, Moore would become one of the principle architects of the project going forward.

It was during this grant writing process that we got a sense of how much support we could expect to receive from so many different groups in Duluth.

There was Rick Lubbers, editor of the Duluth News Tribune; then-Mayor Don Ness, and Pam Kramer, executive director at Local Initiatives Support Corporation: They all wrote letters supporting our efforts.

We heard from people from across the community; they all wanted us to succeed.

Most importantly, there was the crew down at the Duluth Superior Area Community Foundation. Working with Keri Cavitt and her team really helped us solidify our project and put our best idea forward.

We submitted the final application, and, well, we lost.

We didn’t get the grant.

Now, can we go back to just hanging out and drinking coffee?

Cavitt contacted us a bit later and told us there was another grant opportunity. Were we interested? Sure, we said. Good. The deadline was the next day at 5 p.m. Jennifer Moore and I spent the next 24 hours updating and revising.

Fast forward to mid-January and there is still no time for hanging out and drinking coffee. One River is going forward with passion:

There are plenty of days when I wonder what we’ve gotten ourselves into. The workload is intense.

But most days, I’m meeting new people and learning about new opportunities to partner with this region’s diverse and talented people.

We all remain hopeful that this project will continue the late-Mike Simonson’s tradition of looking for ways to build community among the region’s journalists and storytellers.

Of course, no matter what happens, it’s all Paul Lundgren’s fault.

John Hatcher is a member of the One River, Many Stories grant team and an associate professor of journalism at the University of Minnesota Duluth.