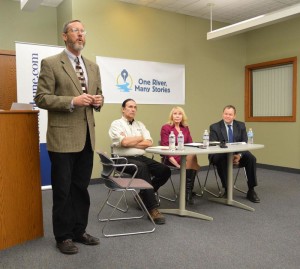 It was another full house at One River, Many Stories’ second community event, Competition versus Collaboration, hosted by The Duluth News Tribune on Thursday, February 11.

Three of our region’s top newsroom leaders spoke to a crowd of journalists, students, and community storytellers about the state of journalism and the possibility of collaboration among media outlets.

Thank you to our insightful panelists: Paul DeMain of Indian Country News; Barbara Reyelts of KBJR & NorthlandNewscenter.com; and Neal Ronquist of The Duluth News Tribune. Their comments on the role of journalism in our region and the possibilities and challenges of collaboration prompted a lively Q & A with the audience.

Paul DeMain: ‘Look for the unique’

Paul DeMain offered his perspective on Indian Country, saying that the community is reviving the old oral traditions of storytelling with the wide availability of video on the web, where news consumers can use audio and visual clues to discern the character and trustworthiness of the storyteller.

DeMain stressed that journalists must recognize that the history of the region goes back much further than many stories suggest — thousands of years — and “we haven’t exhausted the stories yet.” On what to report, he said, “Look for the unusual; look for the unique.”

Collaboration on a project like One River where everyone has a common interest in the subject, he said, is is a good place to start. DeMain added that he hopes this will lead some day to collaboration on harder issues. DeMain noted that while the economic model of traditional journalism has been disrupted, the story-gathering and dissemination process has not altered much from cave paintings, to photography, to the very visual content on the Internet. He noted that his news organizations are constantly looking at all of the available news sources, vetting everything, and putting out factual information, because their goal is to allow people “to think, and to become better people by doing so.”

Barbara Reyelts said, “Journalism is not dead, and don’t believe anyone who says it is.” She noted that in her career, she’s moved from extensive time spent researching library archives, to nearly instant access to trusted sources online. From closely guarded and long-developed exclusives, to publishing as soon as information can be verified.

Reyelts noted that big networks do not know our region like local journalists do. She sees an evolving difference in some of the ways we disseminate information; now, rather than reporting only facts, her newsroom is more likely to add explanations of why something is happening and who it affects.

Reyelts expressed some skepticism about collaboration, saying that it’s important not to damage the individual voices of local media: “We all tell the same stories, because we’re a small market. We’re just not doing it together.”

She noted that the Native community has been covering environmental issues in the region for a very long time, and mentioned that some bloggers have become a reliable source of information — such as Aaron Brown of MinnesotaBrown — who can provide insight on the wider region. Reyelts said, “Collaboration has been anathema in the past. But this project might provide the possibilities of both independent and collaborative reporting.”

Neal Ronquist said that “the future of journalism is bright” and that more information is being consumed by more people than ever before. While the economic model of traditional journalism, relying on ad revenue and subscriptions, has changed, he sees the growing move to digital platforms as essential.

Ronquist thinks that newspapers will attempt to stay close to their strengths — marketing and content delivery — but will be more willing to enter into resource partnership opportunities and become more entrepreneurial. He noted that cross-ownership of newspapers, TV, and other media outlets is prohibited under current FCC rules, but thinks a market like the Twin Ports, and the region, would be better served by the possibilities — including collaboration — of such cross-ownership.

Ronquist also said that the journalists they hire must have skills across platforms. He said he looks forward to seeing how the public reacts to the focused attention on the St. Louis River with the One River project, and believes it will be important to follow up in coming months on the ideas brought forth.

As for citizen journalists, Ronquist said that he welcomes them. “It’s good. We should be critical of ourselves, and they help us do that.”

See you at our next event on February 25th — Storytelling Across Platforms, with Dan Kraker of MPR, Sam Cook of the Duluth News Tribune, and chicken farmer and author, Lucie Amundsen of Locally Laid.