05 JulOne River, Many Stories: Looking back and moving forward

The One River, Many Stories team organized a meeting at Teatro Zuccone in late May to find out how the community storytelling experiment was received. Artists, journalists, bloggers, conservationists, scientists and students were among those who participated and helped us assess the project. 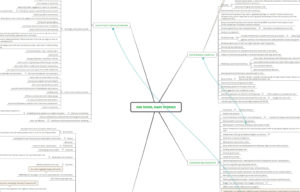 A screen grab of the preliminary “mind map” created during the One River, Many Stories public forum on May 26 at Teatro Zuccone.

If you weren’t able to be at the event, we are still interested in your thoughts and feedback. Fill out the short online form at the bottom of this post to share your experience.

Everyone who attended on May 26 was first asked to gather in small groups to answer questions about their experience with the project. We then gathered participants back together and used a “mind mapping” method to track what you told us. Some common themes and patterns surfaced. Here are some highlights of what we heard from you:

Participation in the project encouraged learning. There were a number of ways our participants learned about the St. Louis River watershed, the communities and people in the region.

Storytellers were creative. Participants noted the breadth and depth of stories told about the river.

Now what? The broadness of the topic was both a benefit and a hindrance to participation, but everyone agreed that as the project moves forward, a few key items should be considered.

Again, if you participated in the One River, Many Stories media collaboration project and could not attend our forum, please complete the form below to share your thoughts and experience to help us decide what’s next.