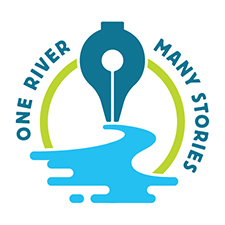 September 29 – October 2 and October 5 – 8, 2016: Tom Isbell and UMD Theater Department will produce a play, “One River,” based on One River, Many Stories at UMD’s Marshall Center for the Performing Arts; more info soon.

Earlier this year, One River presented Skill Sessions aimed at journalists, educators and citizen storytellers to showcase the talent in our region: Photojournalism/Photography and Competition versus Collaboration and Storytelling Across Platforms.

Listen to  KUWS “Writers Read” for One River Many Stories  recorded on April 27 at University of Wisconsin-Superior. Poet Sheila Packa started the evening: “Whatever we write about gets stronger, so I’m glad we’re writing about the river.” Powerful essays on whitewater kayaking during the 2012 flood, the work of a fisheries biologist, duck hunting in the estuary, the healing grace of the river, and several extraordinary poems. Featured writers, pictured above with emcee Jennifer Moore of UMD’s Journalism program: Ashley Sullivan, Mark Munger, Sheila Packa, Deanne Erickson, Stephen Schram, David Cowardin, Cliff Langley, Jan Chronister. Wisconsin Public Radio will archives all submissions; access them at the link above. 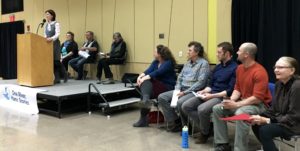 “Writers Read” for One River, Many Stories, April 27